Our new Parliament is sworn in today and they are pretty much the same Government we had before so we know their mood about the Koala Protection Act and whether climate change is caused by man or a natural event.

Over the years whenever I have mentioned climate change, some critics write in because they do believe it is just Mother Nature doing what she does best. Reminding us that she is in charge.

What I do know after 31 years is that every Koala habitat I know of is not safe and that hospitals are filled with sick and injured animals. I have also travelled the country, and during this latest drought, I have seen river systems that are in ecological collapse and rain alone will not fix them. It is too many years of neglect. River systems are absolutely essential for healthy Koala habitat and healthy Koalas.

Over the last week or so, I have been looking at some of the hospital records, particularly with regard to release and mortality rates. I note that one hospital has increased their release rate to 25% instead of 15% which shows what a great job they are doing.

I do not want to single out any organisation but I want you, the Koala lovers of the world to know that the AKF is confident even with all the care and attention Koalas are given when they get sick or injured, a decline curve is happening. Which ultimately means extinction.

I wrote to one of the bureaucrats for the Minister for the Environment in Queensland to seek their data collection of all hospitals in the region to see whether they have accurate statistics on release and mortality rates. They told me:

“I am sorry this isn’t the information I thought you had requested. You are correct, the Department of Environment and Science don’t have programs for systematically collecting mortality/morbidity data on koalas released after vet treatment and rehabilitation. This is due to the need to prioritise limited resources toward rescue, care and release of animals.” 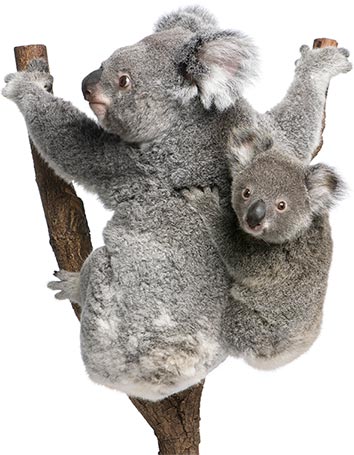 So, why is this important? Under EPBC Act legislation (federal laws) to be able have a listing upgraded from say Vulnerable to Endangered or even Critically Endangered you have to prove that an extinction curve is happening. You have to evaluate how many Koalas there are in any given landscape, you have to think how many females there are and then you have to figure out how many joeys they have and the crucial point, do they survive? You cannot do that without accurate hospital data and better still, having the custodian (which should be the new Environment Minister) making sure the data is collected and that policy follows.

None of that is happening and given that the Queensland Minister has put in place an Expert Panel, I have to ask how can that panel make good decisions if they do not have good data? They cannot.

I looked at the following stats: Out of 328 Koalas admitted, 83 were released, 9 are in care and 234 died. What does this say for the long term future of this population?

Remember the Koala Protection Act will place the onus of proof on the proponent, not the community to prove their activity is harmful. It will also have third party rights which means that the community can lawfully argue their case in court and that the regional forest agreements which is the document that allows logging to occur over a long period of time will have more oversight if Koalas are involved.

Remember too that the Koala forests of Australia house millions of species because they are 20% of the Australian continent. No wonder our Governments are concerned but it is time they realised that protecting Koala habitat will and could help our country recover. I was gratified to see some initiatives recently announced along those lines. Like paying farmers to protect biodiversity and protect riparian areas. It could be that simple, but guess what? You need good maps – and AKF has them.

I am grateful for all of you who write to the elected representatives. Keep up the pressure.

Hello Koala Lovers, I have just opened the Guardian magazine dated 12th July and there is an article called “Rhapsody in green” saying “the tropical East Coast has Australia’s highest poten...

The election is over

Dear Koala Lovers, The election is over and the Australian Koala Foundation has called on the new Prime Minister to enact the Koala Protection Act. AKF is now in planning mode and will be writin...