Save the Koala Month finishes today and it has been very hectic. We launched our month at Dreamworld when David Tree, the famous firefighter, came to Brisbane and told us stories about finding Sam the koala during the Victorian Bushfires.

We then launched our new No Tree No Me ad to sell our bumper stickers (hope you have yours) and last Friday, on Save the Koala Day, we participated in the Save Our Koalas Rally. This Rally brought an unprecedented number of groups together to protest the lack of protection for koalas by all levels of Government, not only here in Brisbane, but all over the country. If I was a politician, I would be very concerned about the level of anxiety and unhappiness in the community. I believe more rallies will be formed around the country. The theme… “we have had enough”. 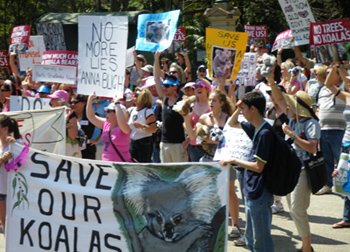 I asked one of AKF’s supporters to tell me what she thought about a standard response she received from the Premier’s Office and this is what she said:

To be honest, none of this makes me feel confident for a future for the Koalas. It is a typical government reply that provides blown out statements that waffle on & basically lead to nowhere.

If the Governments of our country & states were serious, not only about the Koalas but other native wildlife & their habitats, they would stop all further development now & ensure that there are wildlife corridors & would govern local Councils to ensure that cats are kept indoors or in cat runs & that dogs are either kept indoors &/or locked up in yards.

It is an insult to everyone's intelligence as they think that they are providing the Koalas with some sort of compensation by making future developers plant a tree for every metre of habitat lost. How long will that one tree take to grow?

The government has known for a long time that loss of habitat, dog attacks, being hit by cars & a vast array of other factors are threatening the future of the Koala. It angers me that they refer to the Koala's "habitat values" & talk about offsets like they talk about carbon offsets. It amazes me that people are willing to cash in on the Koala's iconic status through tourism & promoting Australia & are willing to do very little to save it & guarantee any chance of a future.

If the Governments are serious, they would be taking action now – not needing another study. You only have to look at the Summary of Koala Crisis Response Strategy & read the words flexibility & areas for social infrastructure to know that the Koala is going to come off a poor second in every aspect. Humans have no right to try & place a value on the Koala or any other animal – all wildlife deserves the right to live.

I couldn’t have said this better. What are our Governments thinking? This beautiful creature is fundamental to our tourist industry, our national identify and more importantly in our hearts. I am just constantly shocked that their replies and words are so hollow.

Our Prime Minister has just returned from New York where he talked about Australia and the world needing a new way of thinking about the environment in preparation for Copenhagen and climate change. Protecting koala trees that store carbon, produce rain, produce shade, reduce temperature and most of all provide habitat for the koala and friends do not seem to be on his agenda. It is very disappointing.

Regards and thank you for your continued support, 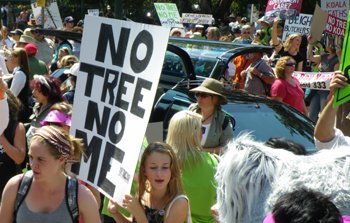 Dear All, I think the words of Koala Campaigner, Nerida (see below), is all I need to say in this blog. I have sent the photos and words to Canberra in preparation for the November 10th Scientific Mee...