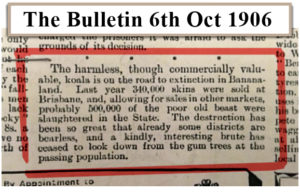 “The harmless, though commercially valuable, koala is on the road to extinction in Bananaland. Last year 340,000 skins were sold at Brisbane, and, allowing for sales in other markets, probably 500,000 of the poor old beast were slaughtered in the State. The destruction has been so great that already some districts are bearless, and a kindly, interesting brute has ceased to look down from the gum trees at the passing populations.” ~ The Bulletin 6th Oct 1906

I thought you all need to see a clipping from October 6th, 1906 about the fur trade which is shocking to read and a timely reminder that our Governments have never had the best interest of the Koala at heart.

There is a document on our website called Black August, which describes in detail many of the issues facing the Koala at this ghastly time including the last mass slaughter in 1927. That document articulates political opportunism and wrangling between the States and the Commonwealth Governments. No-one ever wants to take responsibility so nothing has truly changed since that time. We still see the Commonwealth abrogating their responsibility for the protection of Koala habitats in the States even though the Koala was listed as Vulnerable under the Commonwealth EPBC Act in 2012. Always passing the buck.

I am making an announcement next week about Koala numbers in Australia and I just wanted to reach out now to make us more determined to try and heal the horrors of the past and to make us all even more determined to show the Australian Government they must step in now to do something worthwhile – the Koala Protection Act.

With an election in Australia looming, our political leaders will want to look like they are doing something  and we need to ensure they do what is the only thing that will save habitats. Remember too we have the power to elect them, we are not their servants.

Hello Koala Lovers, Welcome to Save the Koala Month and I am very excited to announce a new initiative entitled the ‘Koala Kiss Project' which is our plan to understand how much adjoining habitat...