Koalas live in complex social groups. Contrary to popular opinion, they are not migratory animals, but highly territorial. In stable breeding groups, individual members of Koala society maintain their own "home range" areas.

In the example below, 'Arnie' is the dominant male, and his home range (the largest at 1km x 1000-400m, and 43 hectares in area) overlaps the home ranges of both males and females. Arnie regularly moves through the area of his home range in a single night during breeding season. This is a socially secure, stable population with breeding females; most have a weaned juvenile in the vicinity and another pouch young.

The home range of each animal fits together like a jigsaw. This illustrates that the habitat supporting this Koala population is ideal for its survival. However, if the available habitat were to be reduced in any way, the potential for survival of each individual would also be reduced. 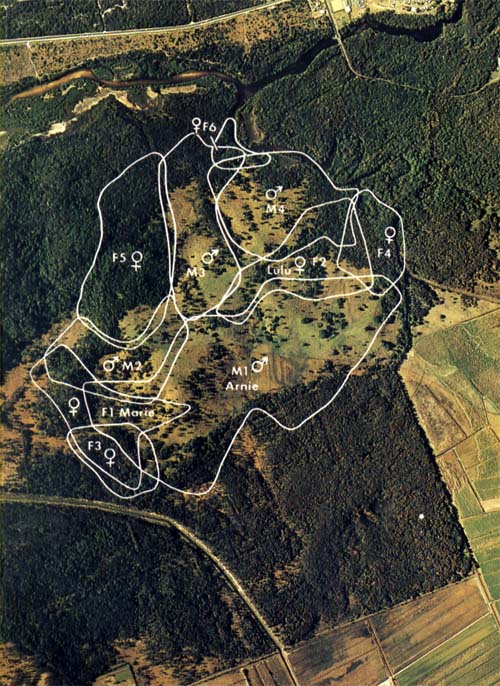 How would you like a highway through your living room? 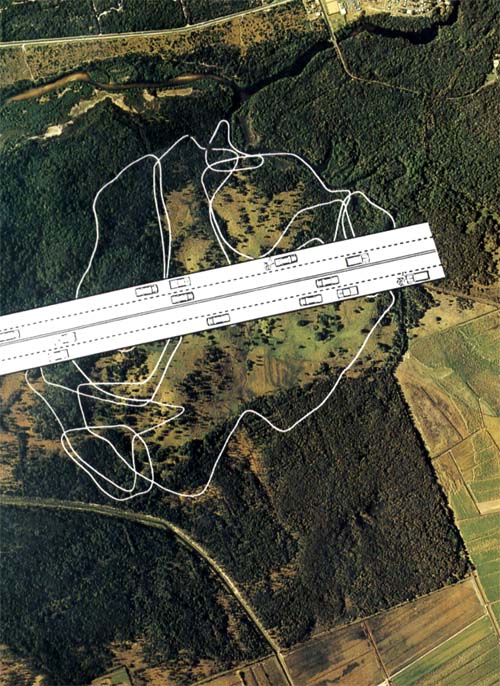 A ‘home range’ consists of a number of ‘home range trees’ and ‘food trees’ which comprise the long-term territory of the individual Koala. These trees provide the Koala with food, shelter and places for social contact which will support it for the term of its natural life (assuming there is no habitat clearing).

Within a socially stable group, the home ranges of individual Koalas overlap with those of their neighbours. It is in the shared, overlapping trees that the majority of social interaction takes place. These are very important trees.

A home range varies in size depending on the habitat quality of bushland. Habitat quality can be measured in terms of the density of key food trees. Home range trees define the boundaries of the individual Koala’s home range and can be likened to surveyors pegs marking the extent of a property. They are not always apparent to the human eye, but Koalas can tell whether a tree ‘belongs’ to another Koala or not.

Even after a Koala has died, other Koalas usually won’t move into the "empty" home range for about a year, which is the time it takes for the scent markings and scratches of the old owner to disappear through weathering and the decortication or peeling of the bark.

When a young Koala becomes sexually mature, it must disperse away from its mother’s home range and find a territory of its own. Its aim is to find another breeding group to attach itself to. The search for other Koalas outweighs the search for suitable habitat, although that is also a prerequisite.

There are always some transient animals who hang around the edges of stable groups. They are usually young males and will often drift between breeding aggregations waiting for an opportunity to become a permanent resident.

Every home range tree and food tree is important to the welfare of each individual Koala and the group in which it lives. Removal of any of these trees causes disruption in the community and extensive clearing can potentially destroy the group, putting all the Koalas at risk of dog attack, car accident, malnutrition and increased susceptibility to disease.

Trees are the Koalas' family homes, bedrooms, kitchens and nurseries. If the home range trees are removed, the Koalas lose both food and shelter. Because of the structure of overlapping home ranges, one Koala cannot just 'move next door' if its trees are removed, as 'next door' already belongs to someone else and cannot support another Koala. Also, if an obstacle like a road or house is placed between the trees that comprise the Koala's home range, it may be cut off from adequate food and shelter and risk injury or death from cars, dogs or disease.

Koalas use a range of sounds to communicate with one another over large distances. There is a deep grunting bellow which the male uses to signify its social and physical position. Males save fighting energy by bellowing their dominance, and they also bellow to allow other animals to accurately locate their position.

Females do not bellow as often as males, but their calls are also used to express aggression as well as being part of sexual behaviour, often giving the impression of fighting. Mothers and babies make soft clicking, squeaking sounds and gentle humming or murmering sounds to one another, as well as gentle grunts to signal displeasure or annoyance. All Koalas share one common call which is elicited by fear. It is a cry like a baby screaming and is made by animals under stress. It is often accompanied by shaking.

Koalas also communicate by marking their trees with their scent.

Back to ABOUT KOALAS