Yesterday I spoke with both the office of Premier Bligh here in Queensland and Minister Garrett’s office in Canberra.

I made the calls offering to visit both of them to express my grave concerns for the koala population in South East Queensland.

As you know, our Koala Campaigners have been writing to both Mr. Garrett and Premier Bligh asking for the release of a scientific document that has been withheld for many months.

The document has now been released – and is even more shocking than we thought.    The Queensland Government has admitted “that the koala numbers have plunged by 64% in 10 years” and “that koalas are accelerating towards extinction by 2010”. 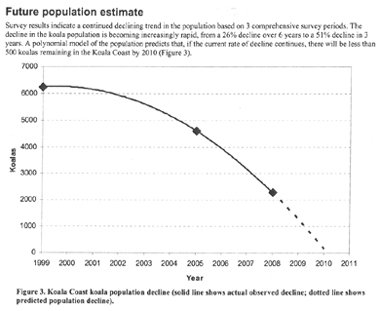 The report can be found at http://epa.qld.gov.au/publications.  It is called Koala Coast Koala Population Status in 2008.

As you also know the AKF had nominated this population for Vulnerable in recent months and many of you may remember that our initial nomination was rejected by the Australian Government because of some bureaucratic process.    Our second nomination was accepted recently but we had only asked for Vulnerable because the science was missing.    It is now available and we will now re-nominate this population as Critically Endangered – one step away from extinction.    The email to the Department went this morning and the document will follow shortly.   It is a great amount of work to do this, and I did point out to both advisors in Government, why is it that the AKF must do this work, when the Government sits by and watches koalas disappear from the landscape?

Minister Garrett actually has powers under Section 517 of the EPBC Act to advise his Threatened Species Scientific Committee of his concerns for a population like this and theoretically, his Committee would then advise him to protect it.  I made this clear to Minister Garrett’s advisor yesterday and it seems to me that it fell on deaf ears.  Currently Minister Garrett is saying that his Committee will only look at this population alongside our other nomination to have the koala listed as Vulnerable across the whole country, and that decision will be made in September 2010.  It appears that the Minister and Premier Bligh’s advisor seem to not understand the urgency of this situation nor the ridiculous situation where a listing could occur when the population is almost extinct.

The AKF made this point in our original nomination in 2003 – that the Australian Government only protected the Tasmanian Tiger three months before the last one went to extinction.   This is one of the most important strongholds for koalas in Australia, and sadly I have watched over 25,000 animals die in my time here at AKF.

Please write a letter to Minister Garrett and Premier Bligh today.  It is urgent.

Last night I went to a community meeting about the sealing of an existing road. I wrote about this road in my Bulldozer of Process article and the process continues to fascinate me - if it were not s...

It is nearly 7 pm. I am waiting to ring in to a local radio station in Northern New South Wales. The presenter's name is Pussycat.  This is a community radio station and she wants to understa...