As you know I went to Canberra last week, along with 40 or so people from the Koala world. Many I knew and there were some newbies in the room; all with good intentions. Minister for the Environment Sussan Ley and Threatened Species Commissioner, Ms. Sally Box seemed to have an agenda about what they wanted to hear and three scientists gave their impressions of Koalas in Queensland, New South Wales and Victoria/South Australia. Fires were not their only concern and habitat loss was seriously mentioned as a threatening process.

The good news is that the Koala Habitat Atlas maps were taken seriously and hardcopies were given to the Minister. That said, it does not mean they will want to use them – if they had, they would have taken them seriously years ago, but I live in hope.

I also asked the Minister to table the Koala Protection Act immediately in Parliament given the AKF believes that it is the only document that will truly get to the issues that were being discussed in the room. She did not respond and I can see they are still wedded to the EPBC Act and perhaps increasing the listing to Endangered. Since then, I have sent her advisor a listing document we sent in 2009 asking for the Koalas in South East Queensland to be listed as Critically Endangered and that was before the Minister in Queensland announced them to be functionally extinct in 2018. I have a feeling that no-one in Canberra has even looked at that document since, so my faith in the system working is still very low.

What did not get discussed was the removal of trees and I made it clear in my short time available that the AKF had high levels of mistrust with all levels of Government and that the EPBC Act is not working (not to mention the State legislations). Even though that federal legislation is now under review (again), I do not have high hopes for it ever being able to do what we think is necessary; protect Koala trees. There are just too many exemptions in the document and as I have harped on forever, land clearing, although considered a threatening process, does not actually trigger the act. This seems absolute nonsense to me. So, what does trigger the Act? And the answer is, the Minister. I did point out to Ms. Ley that she is the 14th Environment Minister on my watch, and I must confess when I got to that point, rage did start to surge through my veins. It is so frustrating being in that room after 32 years and listening to the same old, same old issues, particularly knowing what I know from history and the lack of action from all levels of Government. Luckily there were people on phone lines saying what the AKF absolutely believe and I think everyone did a great job about their own area of expertise. The Minister did thank me for my passion. I must confess that word can annoy me, even though I know I have it, but I did say, in this instance, it was not necessarily passion, but anger that was fuelling me at this point in time. The system is broken.

Submissions for the EPBC Act review being conducted by Mr. Graeme Samuel are due by April 2020. You may want to make a submission and say “Mr. Samuel, the Koala needs the Koala Protection Act.” At the roundtable, I made the point that I feel he has been given a poisoned chalice because every time the Koala has come up against that legislation all I have seen is that review after review has just watered it down to make it easier for industry. I even found a letter from Minister Greg Hunt – three Ministers for the Environment back – which actually articulated that, and also sent it to Minister Ley’s advisor. 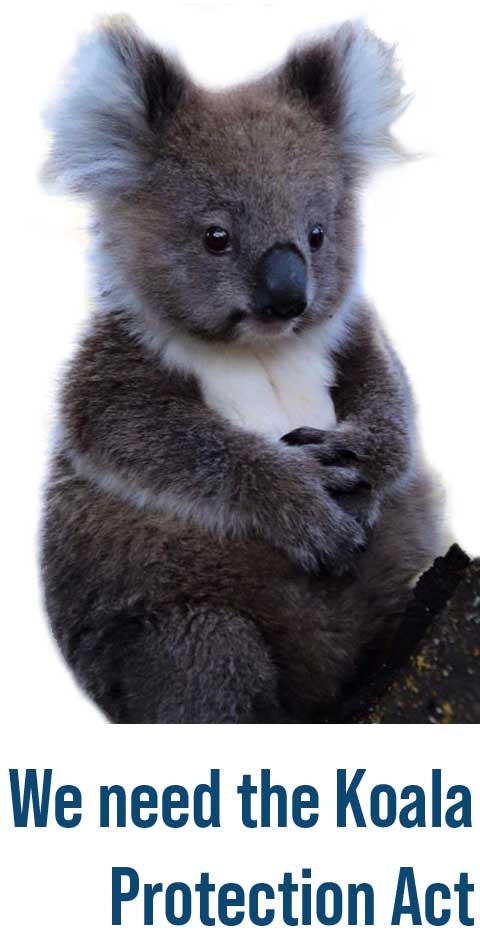 We need the Koala Protection Act, and one glimmer of hope, the Minister did mention that perhaps there might be a Koala section in the EPBC Act after the review. That is sort of good to hear and if she was prepared to support the Koala Protection Act being that section, then AKF would be open to such thinking but of course I am sure they would want it too watered down. We will never do that!

Finally, when the Koala was listed in Queensland, New South Wales and the ACT in April 2012, Victoria and South Australia missed out by a 1% criteria by saying they had lots of Koalas and that they should not be included.

In this roundtable, a Victorian scientist and bureaucrat articulated that they think there are 400,000 Koalas in the Victorian blue gum plantations. I must confess that I cannot fathom that and will want to see the science, but even if they are right, it is sad to know that each of these Koalas are genetically identical and all scientists know that they should actually be counted as “one” because they do not have a long-term conservation value. This is an historic relic from the fur trade. And worse still, what will they do to those Koalas when they get in the way of logging? I will write more fully on that next time.

The AKF has a document entitled Imagine an Australia With No Koalas and there is an essay about how we think the Victorian Government and South Australian Government talked their way out of a listing (page 11).

As you can see it is all very complex. I am writing to the Minister’s advisors to encourage them to realise that time is of the essence and historical issues must not stand in the way of the urgent issues to date.

Next time – let me tell you about translocations…and AKF’s absolute concern about them.

Thank you as always,

The important things in life

Hello Koala lovers, Today, I am going to send you the cutest photo of a Koala because I think that is what we all need right now. As I look at my Twitter feed (yes I am a Twitter-er) I find myself ...

Hello Koala lovers, Thank you for the comments about my last Diary and I think those of you who wrote to the Prime Minister or tweeted to Minister Ley have made a difference. The AKF has been invit...