Two Queensland Government Ministers have just put out this press release. Do we believe that this ‘SPP’ will work?  Basically this says that if a developer cuts down trees that have koalas in them, they will grow more trees elsewhere.  I wonder what they think will happen to the koalas.

Developers will have to help protect koalas under new planning controls being considered by the Queensland government.

Infrastructure Minister Stirling Hinchliffe said a new state planning policy (SPP) to be in place by the year's end aimed at halting the decline of southeast Queensland's koala populations.

"Any developer who impacts on koala habitat in an urban area would have to contribute in a positive way towards the protection of koalas," Mr Hinchliffe said.

"This could include working towards new habitat areas or the rehabilitation of existing habitats."

The SPP would include a new koala habitat statutory map, identifying bushland and rehabilitation areas of value to urban-dwelling koalas.

It would guide planning decisions and development applications, ensuring consideration is given to koala movement and "koala-friendly designs", such as retaining trees, appropriate fencing and low-speed roads.

"The SPP will consider the exchange of land for development on koala habitat areas in the urban footprint," Ms Jones said.

"This would allow the state to secure more land for koalas."

The SPP will be ready by the end of the year, cutting the normal two-year process to just six months.

Submissions will be accepted until August 28.

This legislation will also be added to a long list of legislation, 13 in all, that haven’t worked – see the slippery slide to extinction: 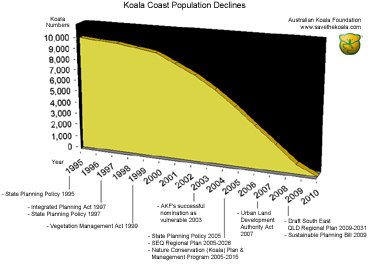 Last night I went to a community meeting about the sealing of an existing road. I wrote about this road in my Bulldozer of Process article and the process continues to fascinate me - if it were not s...