It is time for rage

I have waited until now to write what I think about the fires but watching two Government Ministers standing beside burnt Koalas yesterday and offering money gave me the impetus. 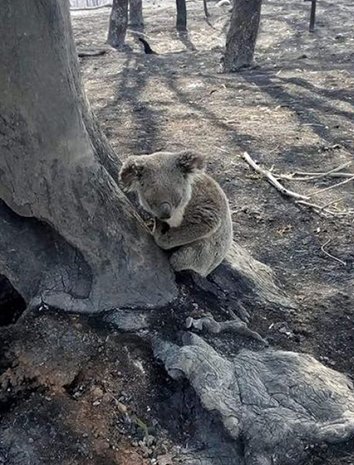 One of the biggest things is lack of water, not just from the skies, but from under the soil. Those who are regular readers of my Diary will know that I have been harping on about water for years, and particularly early last year when I drove some of the areas that have now gone up in smoke. What I saw then was river systems completely dry and I am confident it is not just because of the drought. I am confident there has been gross mismanagement of water and there has now been a perfect storm; no rain, no underground water, too much land clearing, dry understorey, European weeds/trees and fragmented habitats. I have said these things that have affected the Koala repeatedly to those that have not listened for 32 years.

I realised very early on, that the Koala was much hated by industry, not because it is cute and cuddly but because of the size of its habitat. To have legislation like the Koala Protection Act will be of grave concern to those that want to destroy it; but it is time and I have renewed vigour to champion this not only for the Koala, but for all species that reside in their habitat. It would now appear that our Governments might be thinking; ‘gee, I wonder what we can do now to have people believe we love the Koala.’ They love power – that is what they love and they are all out of their depth.

Two of those that have not listened to the AKF, Minister Frydenberg and Minister Ley, stood there yesterday and said they cared about the Koalas. I seem to remember that Minister Frydenberg wrote to me in 2018 and said “we will get to the Koala Recovery Plan next year”, but Minister it was due in 2014 and your colleague Minister Hunt and Minister Burke also promised the same thing. Minister Price did not even turn up to say anything such was her short reign. Minister Ley now has the poisoned chalice.

Well, sign the Koala Protection Act Minister Ley, because you too have the power to do so, right now. All you have to do is call me and I will come to Canberra to explain to you why I think it will work, even after this absolute disaster. 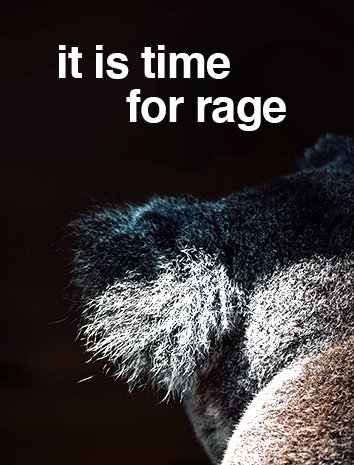 It is time for rage. I have that rage and I can tell you the AKF will be heard, because all of you who support AKF know that throwing money from Government is not the solution we seek. Just look at the power of the Koala to be able to marshal people around the world as a flagship for those that have no voice. I am tired too of people talking about what we have lost; it is time to talk about how we can repair. And we will not be able to do that without maps. I have sent the Koala Habitat Atlas maps to every Minister since we started. I told successive Prime Ministers we had them. I have told successive Ministers in all Koala states, Queensland, New South Wales, Victoria and South Australia and they have ignored us. Why? Because the maps are too accurate. They could have curtailed industry and stopped them slaughtering both the trees and the Koalas – not to mention the other Creatures Great and Small.

I have never felt more determined to speak the truth and I cannot wait for a Royal Commission. But our first priority – get the PM and Minister Ley to sign that legislation into being. Or of course get them to explain why they cannot.

The Prime Minister will have our document on his desk next week.

Change is in our midst

Hello Koala Lovers, Thank you for the letters of support since my last Diary. I am very grateful.   I sit down to write to you almost every day and then something else happens to Koala...

The Australian Koala Foundation team are watching the fires closely and evaluating each fire as it happens. We are trying to determine whether Koalas are in those habitats or whether they are empty. O...