Celebrity candidate wants Australians to Save The Koala

Matilda, a surprising celebrity candidate in the upcoming Australian election, is going on the campaign trail starting 6 June to seek support for a Koala Protection Act – new legislation the Federal Government must pass if the Koala and its habitat are to be safe in the future.

Matilda’s childhood friend Urban of the Koala Army has asked her to travel around Australia to meet disillusioned voters and ask them to “donkey vote” on Election Day – 2 July 2016 – but there’s a catch.

“It’s going to be a heck of a trip,” said Matilda. “I am going to spread the message of concern to my fellow Australians during my 4,000km (nearly 2,500 miles) road trip.”

“Unlike some, I will listen and learn. I will share how concerned I am about the Koala and I will document what I see.”

Urban is, in fact, a Koala. The catch is that Matilda is a donkey. A real donkey. 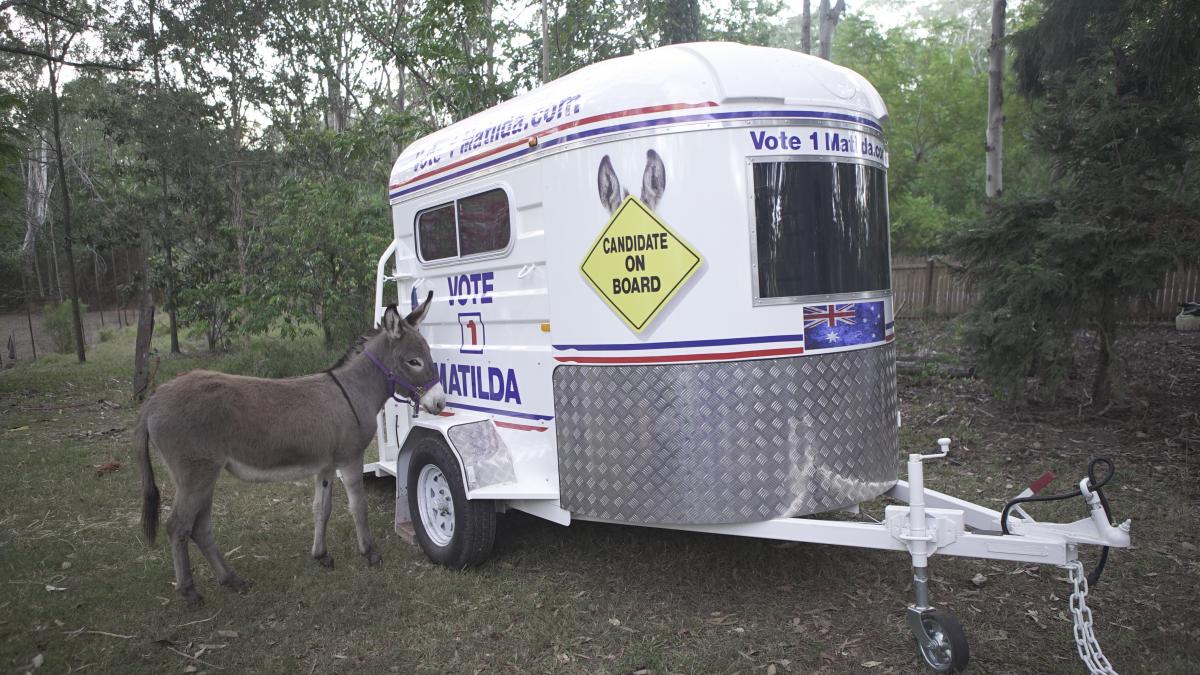 Matilda says her Campaign Director, Deborah Tabart OAM, will be her travelling companion and human voice.

Ms Tabart has been CEO of the Australian Koala Foundation (AKF) for the past 28 years, and says she has seen every Koala issue “simply rejected and ignored by our political leaders who appear to be captive to political donations from industry.”

As Ms Tabart recalls, “At a 2011 Senate Inquiry, I heard industry plead with Senators NOT to protect the Koala. How can the Koala be safe with that sort of attitude?”

Australia, where voting is compulsory for all citizens, uses a preferential voting system. Voters are required to rank candidates on the ballot paper.

Australians have donkey voted since Federation in 1901, in which the spaces are filled 1-6 with no preference for any candidate. This implies “we don’t like ANY of you” However, it is recognised as a formal vote.

Matilda is suggesting that voters put “Vote 1 Matilda” on their ballot paper.

Because she is a real donkey it will be counted as an ‘informal vote’. A donkey vote counts; an informal vote does not.

Voting for a donkey is ridiculous… or is it? Matilda believes voters are currently frustrated with politicians, and they may decide to do just that by choosing to Vote 1 Matilda.

Matilda will be happy if some of her competitors win, as long as their constituents – particularly the Koala constituents – are a top priority and they are not captive to party politics.

If a voter’s local representative is a strong advocate for the environment, Matilda will urge support for their election, but like many Australians she fears that many standing for Parliament may not have Australia and Australians as their prime motive.

A donkey vote was originally considered a “fools” vote, but Matilda is no fool. She and her Campaign Director know that she may indeed pick up many votes.

Estimates over the past few election cycles indicate that donkey voting and informal voting can account for up to 15 percent of all ballots, far greater than the margin of error for most candidates. A vote for Matilda will show that the people have the power – not the politicians.

“People are disillusioned because of big picture problems: global warming, the downturn in the mining boom, alternative jobs and education. Neither of the major parties has mentioned the environment in their platforms, even as Australia experiences major climatic changes,” said Ms Tabart.

Ms Tabart said people are scared of what the future will bring, and hopes her presence on the road with Matilda will remind them of their power

“The voting public has power at the ballot box to make a difference. They can either choose a candidate they like and trust, or they can send a strong message to Canberra: ‘You must listen to us and we are protesting by choosing to Vote 1 Matilda’.”

Matilda was inspired to go on the road by Urban the Australian Koala Foundation because the Koala is in danger and needs the Koala Protection Act.

Current legislation protects the animal itself but not its habitat. The new Act will focus on the protection of trees, and is based on the Bald Eagle Act from the United States.

Koala populations are in danger largely due to mining, forestry and land clearing for agriculture and development, which destroys Koala habitat. The Koala was listed as ‘vulnerable’ by the Australian government in 2012 but Federal laws have since been “weakened at the behest of industry”.

“Koalas are at risk by lack of political will to protect them,” said Matilda.

“No amount of science is enough to convince the Australian Government to protect them and the only solution is: don’t cut down the trees.”

The AKF estimates the total Koala population is between 44,920 and 85,495 as of March 2016, based on scientific assessments underpinned by its robust Koala Habitat Mapping project conducted over the past 20 years.

An Australian government estimate in November 2011, however, based on far less evidence, concluded there were 407,500 koalas remaining in the country. Further, AKF findings indicate that only 18 electorates out of 127 contain more than 1,000 Koalas.

“How did the government get it so wrong? They must recognise Koalas as a national treasure,” she said. “If we can’t save the Koala, we can’t save anything.”

“The Koala Protection Act will guarantee that Koalas are not harmed during any project,” Matilda continued. “Every Koala is important for the gene pool; we cannot afford to lose one more individual.

Matilda also said that she believes the economy is also under threat, as the Koala brings in a staggering 3.2 billion tourist dollars annually and accounts for 30,000 jobs.

“How can the Australian Government allow a species like the Koala to be diminished to such dangerously low levels? What would our Prime Minister do when overseas dignitaries visit if the Koala was gone? Give them a stuffed Koala to hold?”

Ms Tabart adds: “What the people of Australia must know is that if the Koala is in trouble we are all in trouble. We’ve said No Tree, No Me for almost thirty years.”

“I am a big picture thinker!” said Matilda. “My campaign is multi-faceted. We talk about food security but allow coal mines right next door to prime farmland. How can we be healthy with ecosystems collapsing around us and the environment is not even on the election agenda.”

Matilda said that protecting 1.5 million square kilometres of Koala habitat can provide a model for protecting thousands of other species, including humans worldwide, and help to cool a warming planet.”

“A highlight of my road trip will be my press conference outside Parliament on 14 June. I am hoping I will pick up Statutory Declarations from Malcolm Turnbull, Bill Shorten, Barnaby Joyce and Richard Di Natale to say that if elected, they will enact the Koala Protection Act. It will save them a stamp.”

A documentary film crew will accompany Matilda on her road trip, which begins 6 June with a press conference at the Brookfield Showgrounds, 550 Brookfield Rd at 9.30am. on www.Vote1Matilda.com

Matilda will also be available via:

The next three years

The AKF, like all Australians, is waiting until our new Government is formed and ready to enact a Koala Protection Act. We now have great clarity about what we need to do over the next three y...

Why hasn’t the Koala been listed as a Vulnerable species in Victoria and South Australia?

To be eligible for a Vulnerable listing under the federal laws, specifically the EPBC Act, Koalas had to have undergone a 30 per cent decline in numbers over 20 years.  The Australian Government ...