One of my routines, here at AKF is to read each and every Koala carers newsletter from around the country. I have done that since day dot – 1st February, 1988. Over those many years I have seen the names and faces of carers change and I am inspired by their work. The good bits are that koalas have been “fixed” and sent back out into the wild. Some of the stories are amazing and without this valuable work, I am sure the koalas populations of Australia would be in a worse state than now. By and large Government leaves this to the private purse, but that is another story. The sad bits are that tens of thousands of animals have died. During the Senate Inquiry, now what I call “the troubles”, the listing process, I am still gobsmacked that people do not realise how many koalas have been lost, even in my time as the Koala Woman. Thousands. Thousands.  Not to mention before the AKF existed and of course the fur trade in the 1920’s.

So, as our Save the Koala Month message says “It is Time to Worry, Mate”. When I read a recent newsletter, I saw a group publish the Australian Government’s assessment of the numbers of koalas in Australia and it is a staggering 407,500 animals. AKF thinks this is absolute nonsense.  We believe it is less than 100,000 and even more accurately we predict between 45,000 and 85,000 Koalas.
I am sure you agree this is a massive difference. Who is right? Then I wondered a couple of things.  Why hasn’t this group published what we think are the accurate numbers? Is it because they trust Government? Are they justified in trusting them? We have $8m of research to support our theory and better still we have 2000 field sites (often in difficult terrain) and 100,000 individually measured trees that give us enormous confidence that we are right. (As you read these figures, I would like you to consider how much work this took and next time you are walking down a street – can you stop at a telephone pole, embrace it and then think of doing that 100,000 times).
So, if the AKF is right, how can our Government say what they are saying?
And better still, why are they saying what they are saying?
As with all things, we have tried to make it simple, so the following graphs should show you that if the Australian Government and the AKF agreed on the population numbers of Koalas from 1990, in that they state that there were 573,400 koalas (which we don’t and will never agree upon), and we use theirs and our final population number figures from 2010, you will see the scary difference in what we are saying.
It is Time to Worry Mate!  Support AKF and Save the Koala Month. 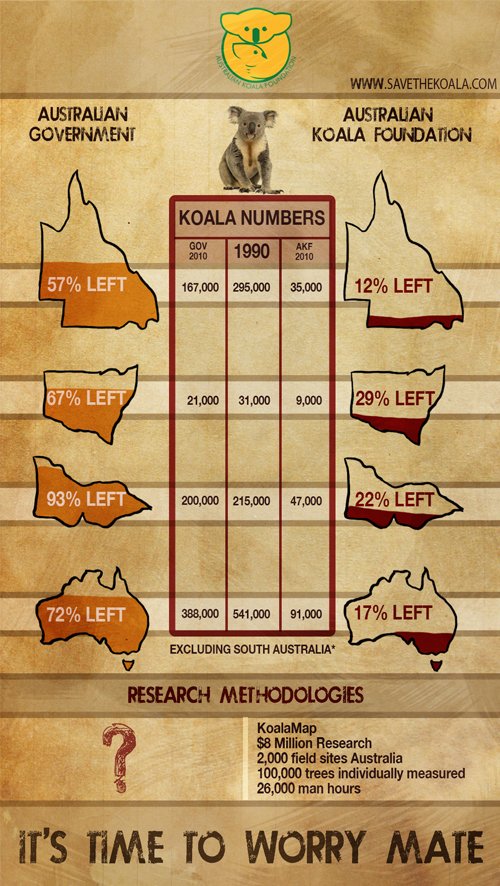 Hurricane Sandy is still pounding the East Coast of America and Australians are sending prayers and well wishes to those that are suffering at the hands of Mother Nature.   Both our continents kn...

Happy Save the Koala Month to everyone.  We hope you are out celebrating how much you love Koalas and in doing so, raise much needed funds for our work.  Remember, the AKF never...