Yesterday I responded to tremendous media coverage of the recent news about the culling of Koalas in Cape Otway.

In one TV interview I said that I was glad that the Victorian Minister for the Environment is speaking respectfully about the Koala.  It has been my experience over all these years, that I write to a Victorian Government Minister about the plight of the Koala and never hear anything in return.   I wish I had kept a record of the number of letters I have written to each Minister over these 27 years.

When I first got my job, I used to visit the Department in Melbourne and tell them very excitedly about the research we had funded and how it might help with the problem.   We have repeatedly since then given them maps like the one below, which shows why the problems in Victoria continue. 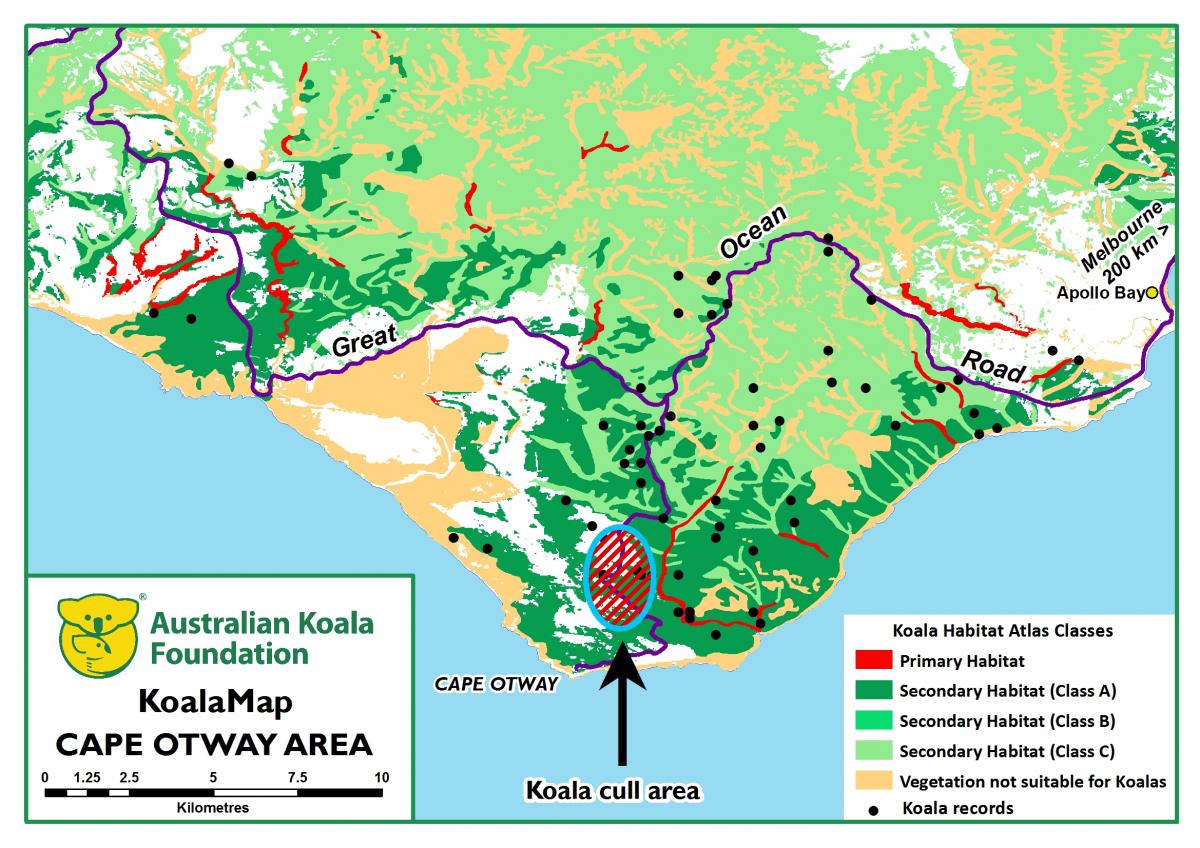 There is a section on our website which describe this complex problem, our official press release and also I have read all your comments today on our Facebook.  Firstly, remember AKF is about caring for the Koala, so if animals are suffering, then of course they have to be euthanised if a Vet deems that to be necessary.   After watching a video released by the Department, Rebecca on my team, said she felt sorry for those that have to euthanise the animals.    I then asked Douglas Kerlin what he thought and we both agreed that the “Department” and those that work there have known about this problem for years.

I went to this site in August of 2011, the night before the Senate Inquiry in Melbourne.    We sent a similar map to the Victorian Government at that time with warnings.  They were ignored.

So should I write to the Minister again?  If I did these are the questions I would like to ask.

1) When did the Department notice tree deaths in the Cape Otway area?

2) Has a botanist investigated tree deaths in the Cape Otway area? If not, why not? If so, who and when? Can we see a copy of the report?

4) If Koalas were starving on Cape Otway, why were so many healthy tree banded (to prevent Koalas feeding)?

5) Who in the Victorian Government gave approval for Koala culling?

6) When did culls on Cape Otway take place?

7) Have any other secret culls taken place in other parts of Victoria?

8) What role did the Federal Government play in approving and/or monitoring the Koala culls?

9) Was there any consultation with the Federal Department of the Environment?

10) Which universities were involved in the Koala culls?

11) Which zoos were involved in the Koala culls?

12) Were any local tourism operators involved in the Koala culls?

13) Were any local wildlife carers involved in the Koala culls?

14) Which organisation had oversight over the Koala culls?

15) Which organisation had oversight on Koala capture operations?

16) Which organisation had oversight on the Vets involved?

17) What locations were Koalas removed from?

18) How many Koalas were captured each day?

19) Who captured the Koalas? How many teams? How many people per team?

20) What qualifications did people capturing Koalas have to demonstrate they could undertake such work?

21) How were Koalas captured? What were the protocols?

22) Were all Koalas assessed by vets?

23) Where are the reports for each Koala capture?

24) How many vets were involved in assessing Koalas?

25) Where did those examinations take place?

26) What were vets assessing, and how long did those assessments take?

27) Where are the vet assessment reports for each examined Koalas?

28) How many Koalas were euthanised?

29) How many lethal injections and/or bullets were used?

30) How did the Department dispose of the bodies?

31) How many animals were released following veterinary inspection?

32) Were those animals tagged?

33) Where are the ethical approvals for this work?

This is a heck of a list isn’t it.  Then I asked Dave Mitchell, another loyal AKF member and asked him to explain the map and his thoughts.

"The map shows where the culling area is (and the only tree species there is Coastal Manna Gum), it is very small, no more than 300 hectares. You can see that there are plenty of Koala records (black dots) outside the culling area, back towards the Great Ocean Road. This is in forest that shows little evidence of overbrowsing, and yet you can see tourists stopping to take their Koala photos here too. This forest has a more varied mix of Koala food trees including Messmate, Manna Gum (not the Coastal species), Monkey Gum, Mountain Grey Gum and Blue Gum.

1) Where did both lots of Koalas originally come from? Was it the same place?

2) Is there a soil pathogen (e.g. Phytophthora, perhaps introduced by tourists) that is the underlying cause of tree mortality?

3) Is it because the dead forest is a “monoculture” that is it more susceptible to pathogens?

4) Do any Koalas use both types of forest?

5) Have any areas been identified where Koalas might be safely relocated?

Another question or two: Were any Koalas translocated? Where? Is their health being monitored in any way? Has the Department identified any potential release sites?"

So, I think it is time that the Minister answered these questions and perhaps you could write to her (click here) and Minister Hunt (click here) – and say “will you work with AKF scientists to understand the current problem and look for solutions to reduce the suffering into the future".

My final comment Minister, if you or your team are reading this Diary.    Your Department, for as long as I have been the Koala Woman, see the Koala as a pest species and to be eradicated.   I would also ask you to ask your Department how many other Koala populations were destroyed in fires over the last 15 years and better still how those fires started.     At least Minister, you are now treating the Koala with the respect it deserves.

Ms. Bishop – I think you should intervene. (click here to email Ms Bishop)

Hi all, Yesterday, after a very special Board meeting at Quinlans (pictured below), AKF had a wonderful time remembering and celebrating the AKF founding board member Dr. John Woolcock. See more in o...

It is with great sadness that the AKF and I advise of the passing of our Founding Research Chairman, Dr John Woolcock.   His funeral will be held tomorrow. There are truly not enough words ...