Threats to the Koala

PROJECT TIP
Think of some ideas which could help in reducing the amount of bushland which is cut down.

Since Europeans first settled in Australia in 1788, Australia’s eucalyptus forests have been vanishing at an alarming rate.

More than four fifths of original Koala habitat has been destroyed. This makes it very important that we save what is left.

Koalas in the wild face a series of threats to their continued survival. The main threat is loss of habitat.

Clearing of the land for expansion of human settlement, for example, for agriculture, housing, mining, forestry, shops, factories and roads. While humans need these modern conveniences, we should be trying to put them in places where Koalas and other wildlife are not already living, and to think of other solutions to the problems of modern life, such as improving public transport. Click here for more information on Koala habitat.

Clearing of the eucalypt forests means that all wildlife, including Koalas, will suffer from: 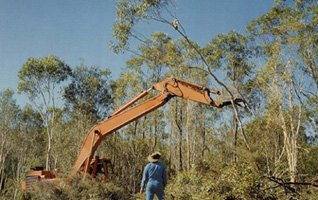 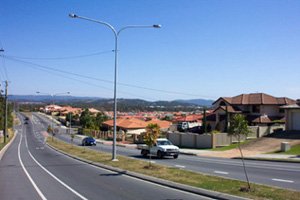 When habitat is cleared for roads and housing estates, cars and dogs become a serious threat to Koalas. Over 4000 Koalas are killed each year by cars and dogs. Click here for more information about Koalas and dogs.

Koalas are at great risk from bushfires. If a Koala population is living in an area of bushland which is surrounded by development, the whole colonly could be wiped out in a single fire. 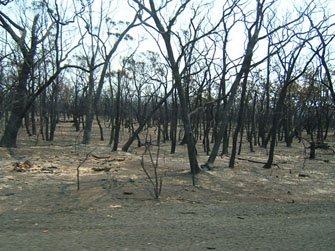 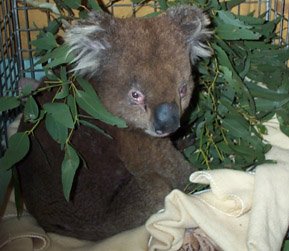 There are four common Koala diseases caused by the chlamydia organism: conjunctivitis which can cause blindness, pneumonia, urinary tract infections and reproductive tract infections, which can cause female infertility. The symptoms of chlamydia manifest as sore eyes, chest infections, and “wet bottom” or “dirty tail”. Chlamydia is harmless in populations with unlimited resources, but manifests in times of stress, which happens when habitat is reduced. In disease-free populations which have been moved to areas where they were not native or where there is not enough habitat to support them (such as on some islands off Victoria and Kangaroo Island in South Australia), problems with overpopulation have arisen because of this unnatural situation. Koalas also suffer from a range of cancers like leukemia and skin cancers. Click here to learn more about Koala disease and injury.

Changes in the balance of the ecosystem can lead to dieback. The cutting back of the original vast forests has created patches of forest separated from each other by treeless land. Small, isolated patches of forest are prone to dieback. Dieback is a general term for the gradual dying of trees due to factors such as land degradation, leaching of soil nutrients, changes in the composition of vegetation communities, rising water levels underground, salination (or salting-up) of the soil, erosion caused by wind and water, exposure to weather and excessive defoliation (or loss of leaves)

The underlying cause of all these factors appears to be the clearing and disturbance of forests. Seventy five percent of the main Koala food tree species are declining in numbers as a result of dieback.

Today the natural predators of the Koala do not make a significant impact on wild populations. They include goannas dingoes, powerful owls, wedge-tailed eagles, and pythons, all of which are most likely to prey upon juvenile Koalas.

Feral animals are another threat Koalas have had to face since European settlement. Foxes have been blamed for preying upon young Koalas when their mother descends to the ground to change trees, and large feral cats may also be a problem for young Koalas. A decline in Koala populations has also been observed in times of drought.

“Our beautiful Koalas can’t live without their gumtrees.” Samantha (7)

Back to KOALA THREATS