The Koala – Endangered or Not? 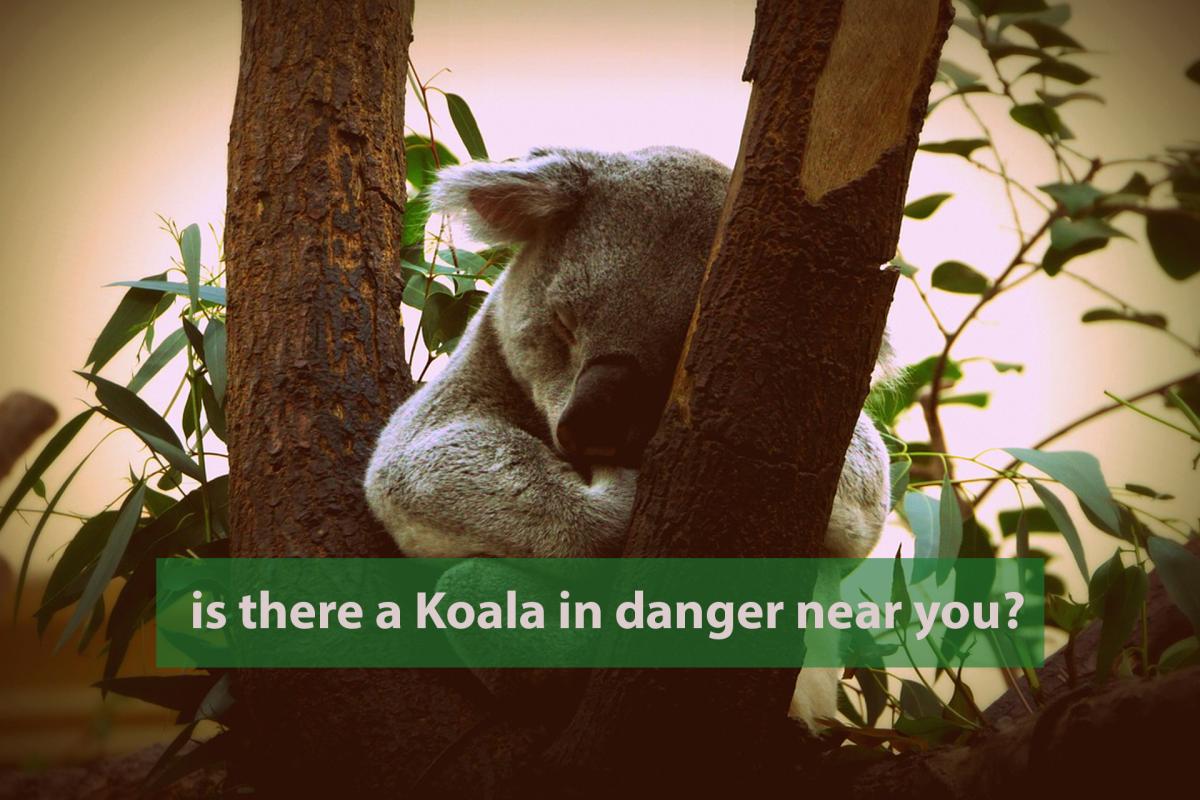 FACT: Meaningful legislation is the only way to protect koalas.

There is currently no legislation, anywhere in the country, that can protect Koalas and Koala habitat in Australia. The listing of the Koala as “vulnerable” under the Environmental Protection and Biodiversity Conservation Act in 2012 changed nothing and did not cover Koalas in Victoria nor in South Australia. Now in 2022 the Koala was listed as “Endangered” under the Environmental Protection and Biodiversity Conservation Act and the law is not fit for purpose. If it did work, how come the listing got worse.   This is supposed to be the premier law for protecting Australia’s environment, yet it is powerless. By the time you read this page the bulldozers may already be working, but it is not too late to take action. Below we have listed some of the things that might make a difference.

Media attention can help. Contact your local newspaper. Often they will have an environmental reporter who may be interested in the plight of your Koalas. Write letters to the editor of your local and national newspapers.

Speak to your federal member. The Government needs to hear your story to convince them to protect Koalas and their habitat. More here.

Join the Koala Army. The Australian Koala Foundation is committed to the introduction of the Koala Protection Act to provide real legislative protection for koalas, and we need your help.

In April 2012, the Australian Government declared the Koala as ‘VULNERABLE’ under the Federal EPBC Act in NSW, the ACT and QLD. Victoria and South Australia were excluded from the listing.

In February 2022 the Koala was listed as ‘ENDANGERED‘ in QLD, NSW and ACT under the EPBC Act. The AKF believes that the Koala should have been listed in all States. Research conducted by the AKF strongly suggests the Koala’s conservation status should be upgraded to “CRITICALLY ENDANGERED” in the South East Queensland Bioregion as the Queensland Minister for the Environment has declared them to be “functionally extinct”.

Koalas are in serious decline suffering from the effects of habitat destruction, domestic dog attacks, bushfires and road accidents. The Australian Koala Foundation estimates that there are less than 57,920 Koalas left in the wild, possibly as few as 32,065. You can see how we determined those figures here.

It is the AKF’ view that is no legislation that effectively and/or consistently protects Koala habitat anywhere within Australia, not necessarily because the legislation does not exist, but because there is not always the political will to adequately resource, implement, police and enforce such legislation.

That is why the AKF wants a Koala Protection Act.

There are four states where Koalas occur in the wild – Queensland, New South Wales, Victoria and South Australia – and each state has its own legislation (see below).

The AKF believes that the Federal Government is abrogating it’s responsibility for protection of Koala habitat to the States. Then the States often pass principal responsibility to local government and then in AKF’s view, the biodiversity of Australia is just extinguished. Local government is where most day to day decisions are made about what happens to Koala habitat but where there is often the least amount of resources and expertise in wildlife management or habitat assessment.

The Koalas in Queensland are listed as ‘ENDANGERED’ under the EPBC Act. This occurred in Feb 2022.

History; With a change of government, in August 1996, the government of the day advised the AKF in writing that it intended to upgrade the Koala’s listing to ‘Vulnerable’ by the end of 1996. This did not happen.

In May 1998, the Queensland Premier advised the AKF that it was proposed to add a class of wildlife called “management dependent wildlife” to the Nature Conservation Act 1992. He indicated that the Koala was expected to be scheduled in this new class of protected wildlife. It did not happen.

In September 2003, the Australian Koala Foundation and other Koala scientists were invited to make submissions to the Queensland Government and the Scientific Advisory Committee concerning the current status of Koalas in Queensland. The AKF nomination recommended that Koalas be immediately listed as ‘Vulnerable’ throughout the South East Queensland bio-region, and that consideration be given to listing Koalas throughout Queensland on precautionary principles. (A precautionary approach entails caution, or care-taking, anticipatory action to prevent harm, even if the cause and effect are not fully established scientifically at that time.) Failing the latter, it was recommended that the conservation status of Koala populations in other key bio-regions be assessed as a matter of urgent priority.

In March 2004, the Queensland Government upgraded the Koala’s conservation status from ‘Common’ to ‘VULNERABLE’ throughout the South East Queensland bio-region, under the Nature Conservation Act 1992. This area stretches from Gladstone, south to the Queensland/New South Wales border and as far west as Toowoomba. The decision was based on evidence supplied to the Scientific Advisory Committee, including: Koala mortality rates; rates of habitat loss, fragmentation and degradation; Koala population estimates; modelled Koala population decline and extinction risks; and projected human population growth. Among other things, the upgrade from ‘Common’ to ‘VULNERABLE’ should afford Koalas in the South East Queensland Bioregion a higher level of protection from habitat clearing and other threatening processes than was previously the case. In 2015, the Queensland Government upgraded all Koalas to Vulnerable.

In parts of South East Queensland, the decline of Koala habitat is of major concern e.g. as a result of clearing and deterioration of Poplar Box woodlands. Many Koala populations are thought to have disappeared or to be in serious decline. Often members of the public are surprised to learn that the precautionary approach is not taken in practice by authorities. If the precautionary principle were followed, a population might be considered under threat until demonstrated to be common. Instead, it is presumed to be common unless proven otherwise. Scientific studies of status are not undertaken for all species. They are only undertaken for a small minority. The collection and interpretation of sufficient data requires considerable resources. Public perceptions and political will also play a role in whether or not applications are successful.

Click here for more information about the ‘Vulnerable’ listing.

‘ENDANGERED’  The NSW Koala population is listed as Endangered under Federal laws, the EPBC Act. This occurred in Feb 2022.

The NSW Government first listed the Koala as ‘Rare and Vulnerable’ in 1992 and this status was later reaffirmed as ‘VULNERABLE’ within the Threatened Species Conservation Act 1995. In recognition of the continuing decline of Koalas and Koala habitat in NSW, in early 1995, the NSW Government introduced State Environment Planning Policy No 44 – Koala Habitat Protection (SEPP 44). This is the first state-wide species-specific planning policy introduced by any government in Australia.   The New South Wales Government has never implemented a Koala Recovery Plan, written at least 10 years ago and is now, as a result of a Chief Scientists Report looking to protect the Koala.  The AKF does not believe that NSW Koalas are safe.

The Koala is not on the official Threatened Species list in Victoria and therefore the state government is not prompted to make any hard management decisions. Some islands and some isolated Victorian mainland habitats have so-called ‘overpopulation’ problems. These are predominantly on small offshore islands that fall outside of the Koala’s natural range (ie the area inhabited by Koalas before white settlers arrived) and in isolated, inbred populations on the mainland. Koalas were deliberately introduced to these islands and then re-introduced to mainland areas where original populations had disappeared, in large part due to the fur trade. In Victoria, the shifting of Koalas to different areas began 80 years ago and continues up to the present day. These actions have created unusual ‘zoo’ like situations which, among other things, support populations with reduced genetic diversity and vigour. Land use, management and ecological histories are highly complicated at these locations and although factors such as edge effects, insect attack, weed spread and salinity affect forest health, Koalas are often solely accused of causing dieback through ‘over browsing’.

Koalas were re-introduced to South Australia from Victoria after the species was driven to extinction in SA during the fur trade of the 1920s. Subsequently, a population was established on Kangaroo Island where Koalas had never occurred naturally before, relocating animals from Victorian islands, and there is now concern about “over-abundance” of Koalas on the island. Many of the same problems which affect Victoria’s now-isolated populations apply to the Kangaroo Island population. (See information about isolated Koala populations above) The problems on Kangaroo Island are man-made and require well-considered scientific management. Koalas have also been re-introduced to a few areas of mainland South Australia.

On 12th February 2022 the Koala was listed as Endangered under the EPBC Act.

The Koala was listed as Vulnerable under the EPBC Act in May 2012. A Recovery Plan was supposed to have been written and finished by December 2014.

The AKF wants a Koala Protection Act. The EPBC Act, is incapable of protecting the Koala.

Listings for the National Koala population

The IUCN (The International Union for Conservation of Nature) lists the Koala as ‘POTENTIALLY VULNERABLE’. This relatively low listing is influenced by Victoria’s “apparently” stable official Koala conservation status. However, the Australian Koala Foundation does not agree with the Victorian Government’s assessment of that state’s current situation.

In 2000, the Koala was listed as ‘THREATENED’ under the United States Endangered Species Act by the US Fish & Wildlife Service. This is one category below ‘Endangered’.

Back to KOALA THREATS