Physical Characteristics of the Koala

The Koala is a marsupial 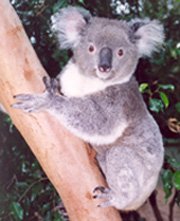 The Koala (phascolarctos cinereus) is an arboreal (tree dwelling), herbivorous (plant eating) marsupial. The word ‘marsupial’ comes from the Latin word marsupium, meaning ‘pouch’. Most, but not all, female marsupials have a permanent pouch in which to raise their young.

When Europeans first came to Australia they thought that Koalas were bears, so they were often called ‘Koala bears’. Not much was known about marsupials at the time of settlement and it’s possible that no European had seen a marsupial prior to that.

Some early settlers also referred to Koalas as ‘monkeys’ and some people still call one of the favoured Koala food trees in the south of Australia ‘Monkey Gums’. However, in an effort to educate people that Koalas are marsupials, we discourage people from using these incorrect names, especially ‘Koala bear’, which is in fairly common usage. The correct term is simply ‘Koala’.

Adaptations for a life in the trees

The Koala is well suited to its life in the trees. Unlike other arboreal marsupials such as the tree kangaroo, the Koala does not have an external tail. However vestiges of a tail are still present in the skeletal structure of the Koala, indicating that at some time in its evolutionary history an external tail was present. It shares this feature with the wombat.

Above: The Koala’s closest relative is the common wombat.

Despite having no tail, the Koala has an excellent sense of balance. With a lean, muscular body, and comparatively long, strong limbs, the Koala can support its weight when climbing. The front and hind limbs are nearly equal in length and much of the Koala’s climbing strength comes from the thigh muscle, which joins the shin much lower than in many other mammals.

The Koala’s paws are specially adapted for gripping and climbing. Rough pads on the palms and soles help it to grip tree trunks and branches, and both front and hind paws have long sharp claws. Each paw has five digits; on the front paw, two digits are opposed to the other three–rather like a human’s thumb–so they are both able to be moved in opposition to the other three. This allows the Koala to grip more securely. Distinctive parallel Koala scratch marks on tree trunks are due to this particular characteristic.

On the hind paw, there is no claw on the biggest digit, which is opposable to the others for gripping. The second and third digits are fused together to form a double-clawed digit which is used for grooming purposes, such as for removing ticks. 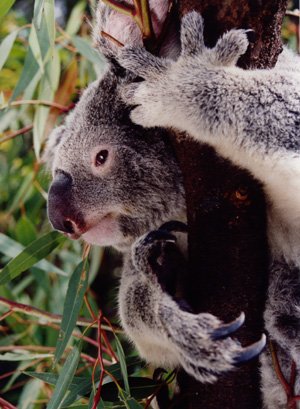 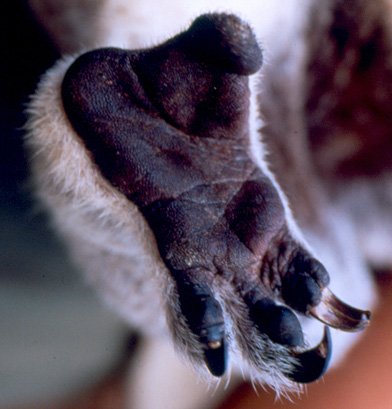 The Koala’s fur – a protective “raincoat”

Koalas have thick, woolly fur which protects them from the extremes of both high and low temperatures, and which also acts like a ‘raincoat’ to repel moisture when it rains. The fur varies in colour from light grey to brown. Koalas in the south generally tend to have fur which is darker and thicker (and sometimes browner) than those in the north. These variations are gradual changes from north to south, and there are some differences of opinion amongst scientists as to whether the variations mean that there are separate sub-species of the koala.

Koalas have patches of white fur inside the ears, on their chin, chest and neck, inside the front limbs and sometimes on the back of the hind limbs, and usually in patches on their rump. Mature males are recognisable by the brown scent gland in the centre of their chest which they rub on the tree trunks to deter other Koalas, especially other males, from entering their home trees.

The fur on the Koala’s rump is densely packed and provides an inbuilt ‘cushion’ for the hard branches it sits on. The rump’s white speckled appearance makes Koalas harder to spot from the ground.

How big are Koalas?

Koalas in the south of Australia are considerably larger and have thicker, often browner fur than those in the north. These are likely to be adaptations to the colder winters in the south of the country.

Although the Koala’s head is large in proportion to its body, its brain is smaller in comparison to other closely-related marsupials (in relation to their size), and has less surface folding and larger hollows within the brain. It’s been suggested that a smaller brain uses less energy and that this could be an adaptation to allow the Koala to survive on its low energy diet.

The Koala’s unusually large, leathery nose is one of its most noticeable features. Koalas rely on their highly developed sense of smell to differentiate levels of toxins in eucalyptus leaves, to detect the levels of toxicity in the leaves at any particular time. They also need to smell the scent warnings put on trees by other Koalas. It’s thought that the Koala’s keen sense of smell is already well developed at birth, leading the blind and immature newborn joey to the pouch through the scent of the mother’s milk from the teats in the pouch.

Koalas’ large ears provide a keen sense of hearing, which is necessary for their socialisation with other Koalas, as they can live in populations where each Koala lives large distances apart. Photo: Christiane Scheffler

Koalas’ eyes are relatively small in relation to the size of their other sensory features, such as their ears and nose. Their eyesight is not particularly highly developed.

The differences between male and female Koalas 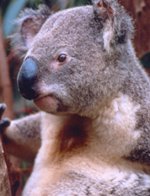 Adult male Koalas are larger than adult females, who have a pouch in the centre of their abdomen with the opening more towards the bottom of the pouch than the top. The external genitalia are visible on a male Koala.

One of the easiest ways to identify the sex of a Koala is to look for the dark brown scent gland which is located in the centre of the white chests of mature, breeding males. Females and young pre-breeding males have a plain white chest. The male Koala is often referred to as a ‘buck’ and the female as a ‘doe’.

Female Koalas have been described as having a ‘backward-opening’ pouch like wombats, as opposed to an upward-opening pouch like kangaroos. However, that’s not strictly true. When a female Koala first gives birth to young her pouch opening faces neither up nor down, although it is located towards the bottom of the pouch rather than at the top. It faces straight outwards rather than ‘backwards’.

It sometimes appears to be ‘backward-facing’ because when the joey is older and leans out of the pouch, this pulls the pouch downwards or ‘backwards’. The pouch has a strong sphincter muscle at the opening to prevent the joey from falling out.

Left: The Koala’s pouch appears to be ‘backward-opening’ when the older joey puts its head out. The opening is towards the bottom of the pouch rather than at the top. Photo by Wendy Blanshard

The Koala’s body temperature is consistently lower than most mammals, at 36.6 degrees C, and they have a low metabolic rate.

The resting heart rate of a Koala is anywhere between 70-140 beats per minute (it will depend on a range of factors, including the age of the Koala). It can be difficult to measure a resting heart rate for a Koala as they have a ‘sinus arrhythmia’ which means that their heart rate and breathing get out of sync. This can cause fluctuations in the heart rate which aren’t a reflection of the actual heart rate–resting or active.

Koalas are the only other animal that have individual fingerprints like humans. A scientific study compared human and Koala fingerprints, finding that the Koalas’ are easily distinguishable from humans’, but there are some similarities. It was noted that each Koala has a different fingerprint from other Koalas.

It’s a misconception that Koalas don’t have a rib cage and that is why they don’t like to be picked up. Of course, they do have a rib cage to protect their internal organs. However, while many mammals–most marsupials and primates like us–have 13 thoracic vertebrae and therefore 13 pairs of ribs, Koalas have only 11 pairs; the least of any recorded marsupial species. They have a curved spine and a cartilaginous pad over the end of the spine which may make it more comfortable to sit on branches and in tree forks. Koalas are sensitive around their abdominal area and need something to grip onto when being picked up. A Koala should not be picked up under its arms like a toddler because it’s accustomed to gripping onto branches with its front paws, and it will feel uncomfortable and vulnerable.