Life cycle of the Koala

The breeding season for Koalas is approximately August to February. This is a time of increased amovement for Koalas, with sound levels increasing as males bellow more frequently. This is also when the young from the previous year leave their mothers and disperse. This period is the busiest for Koala carers, as suburban Koalas are on the move, crossing paths with cars and dogs, and higher rates of stress-induced sickness.

Females generally start breeding at about three or four years of age, usually producing one offspring each year. However, not all females in a wild population will breed each year; some produce offspring only every two or three years, depending on factors such as age and habitat quality. In the average female’s 12-year life span, she may produce five or six offspring over her lifetime.

Once conceived, it is only 35 days before the birth of the baby Koala, called a “joey”. The newborn is tiny (at roughly 2 centimetres long and less than 1 gram in weight), and looks like a pink jellybean; totally hairless, blind, with no ears.

The joey makes its way from the birth canal to the pouch completely unaided, relying on its already well-developed senses of smell and touch, strong forelimbs and claws and innate sense of direction. Once inside the safety of the pouch, the joey attaches itself to one of the two teats, which swells to fill its mouth. This prevents the joey from being dislodged from its food source. The mother contracts her strong sphincter muscle at the pouch opening to prevent the baby from falling out.

The young Koala only drinks its mother’s milk for the first six to seven months and remains in the pouch for that time, slowly growing and developing eyes, ears and fur. At about 22 weeks, its eyes open and it begins to peep out of the pouch. From about 22 to 30 weeks, it begins to feed upon a substance called “pap”, which the mother produces in addition to milk. Pap is a specialised form of faeces, or droppings, which forms an important part of the young Koala’s diet, allowing it to make the transition from milk to eucalyptus leaves, rather like a human baby is fed “mushy” food when it starts to eat solids. Pap is soft and runny and thought to come from the caecum–a pouch connected to the junction of the small and large intestines. It allows the mother to pass on micro-organisms present in her own digestive system to her joey, which are essential to the digestion of eucalyptus leaves, and is a rich source of protein.

The joey leans out of the pouch opening on the centre of the mother’s abdomen to feed on the pap, stretching it open towards the source of the pap, and therefore ‘downwards’ or ‘backwards’. This is why Koalas are sometimes said to have a ‘backward-opening’ pouch, although this is not strictly true.

The baby feeds regularly on the pap, and as it grows it emerges totally from the pouch and lies on its mother’s belly to feed. Eventually it begins to feed upon fresh leaves as it rides on her back. The young Koala continues to take milk from its mother until it is about a year old, but as it can no longer fit in the pouch, the mother’s teat elongates to protrude from the pouch opening. Young Koalas remain with their mothers until the appearance outside the pouch of the next season’s joey. It is then time for the joey to disperse and find its own home range. If a female does not reproduce each year, the joey stays with her longer and has a greater chance of survival alone. 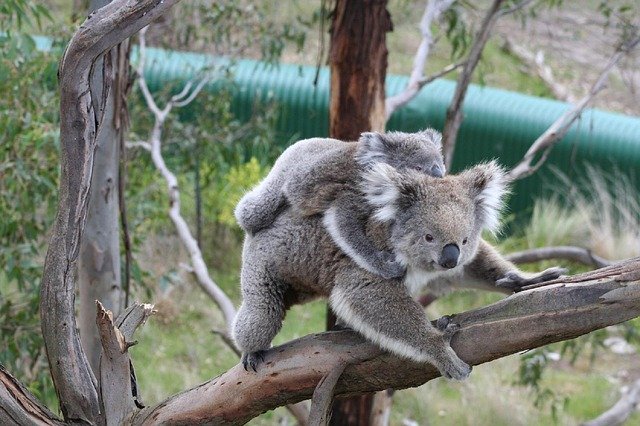 Female Koalas generally live longer than males, as the males are more often injured during fights, and occupy poorer habitat. Males also tend to travel longer distances. Putting a life span on the average Koala can be misleading, as Koalas living in an undisturbed habitat would have a greater life expectancy than those living in suburbia. Some estimates for the average life-span of an adult wild male Koala are ten years, but the average survival rate for a dispersing sub-adult male living near a highway or a housing estate is closer to two or three years.

All about joeys — for kids!

Kangaroo babies aren’t the only joeys! In fact all baby marsupials are called joeys — like Koala joeys, possum joeys, and sugar glider joeys. All baby marsupials have a very interesting life, from the moment they are born to when they leave their mothers to make their way in the world of the Australian bush.

Koala joeys begin their life with an amazing journey

A Koala is born:

When the mother Koala gives birth, the little joey Koala makes its way to the pouch all by itself, with no help from its mother. One of the most amazing things about this is that the Koala joey is blind when it is born, and relies totally on its well-developed senses of touch and smell and strong forelimbs and claws to help it get to the pouch.

The new-born joey weighs less than one gram and looks something like a pink jellybean. It is roughly 2cm long, blind, hairless, and looks very different to the cute, fluffy little bundle that it will become later. Once inside the safety of its mother’s pouch, the little joey attaches itself to a teat which swells to fill its mouth. It takes several months for the joey to grow and develop, drinking its mother’s milk until it first shows its little face to the world.

Another amazing thing about the life of a joey Koala:

When the joey is about 6-7 months old it is ready to begin weaning from milk to gumleaves. To do this, the mother Koala passes on the micro-organisms in her stomach that are necessary to make the digestion of gumleaves possible to her joey. She does this by producing a substance called ‘pap’ which is a specialised form of faeces (or koala poo). Unlike normal hard, dry Koala pellets, ‘pap’ is soft and runny in consistency.

Life outside the pouch:

From 12 months onwards, Koala joeys leave their mothers to find their own home ranges. That’s when life gets harder for young Koalas because they have to find their own territory — somewhere with the right tree species with tasty gumleaves to eat and somewhere near to other Koalas. And hopefully somewhere that is safe from threats like habitat destruction, cars and dogs. The Australian Koala Foundation estimates that at least 4000 Koalas are killed by cars and dogs each year and habitat destruction is the greatest threat to the Koala’s long term survival.